323-259-1407 info@movingforwardnetwork.com
Moving Forward Network > Blog > Port of Wilmington, Delaware – is a major expansion in the cards?

Port of Wilmington, Delaware – is a major expansion in the cards?

Interesting things are happening in Wilmington, Delaware.  Expansion of the Port of Wilmington, a goal of International Longshoremen’s Association locals for many years, is getting a lot of attention and support. 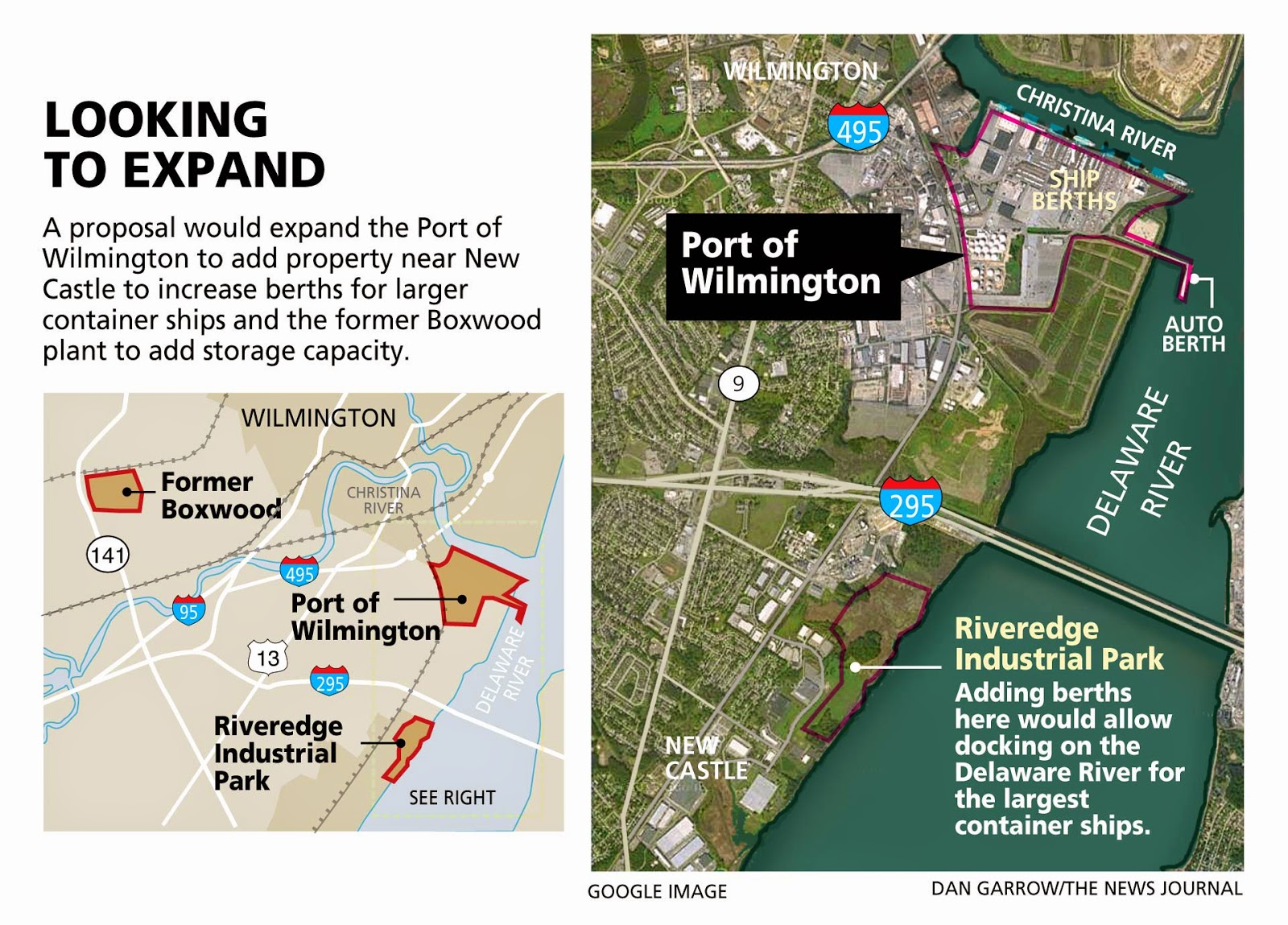 Image source: Delaware Online
As recently as July, this initiative was portrayed as a new port to be developed by a public-private partnership, and Port of Wilmington officials claimed to know nothing about it.
Since then, the Longshoremen’s union funded a study, which is not yet publicly available, and this morning an official of the state corporation that owns the Port of Wilmington was quoted as calling it a “win-win” (See the first news article linked below).
Among the parties involved in discussions is the large Chinese firm Wanxiang, which bought the A123 Systems lithium ion rechargeable battery company and the hybrid car manufacturer Fisker Automotive out of bankruptcy. The company owns the former Wilmington Assembly plant, located just a few miles from the proposed port expansion site.
As quoted by Delaware Online, Jean-Paul Rodrique, a professor at Hofstra University, and voice of caution concerning port expansions, said this about the proposal:
… the Panama Canal expansion has generated a kind of frenzy among ports, whose operators fear they won’t be able to service the shipping lines.
“The problem is there’s a fair amount of expansion projects using Panama Canal expansion as a trigger. The truth is the decision by shipping companies has very little to do with the ports. These are decisions by shipping companies to suit their [business] purposes,” he said.
There already is more cargo capacity than is being used because global trade is not going up, Rodrique says.
“People think the Panama Canal is the light at the end of the tunnel for many ports, which it’s not,” he said. “If it’s a private company that is willing to make a bet, be my guest. But if it’s state or federal, you have to be careful.”
Wanxiang is also involved in the Compressed Natural Gas (CNG) and Liquified Petroleum Gas (LPG) business, which has driven development of new port facilities in many other cities.  As far as this writer knows, the possibility of building an LPG or CNG export terminal at this site has not been raised.
The article below provides good background on the proposal.  Those who want to dig deeper are invited to check out these informative news reports:
____________________

A proposed port expansion in New Castle County has politicians promising thousands of jobs and vowing an end to one of the bloodiest periods on the city’s streets.

Labor unions and state officials are eying a privately held piece of land just south of the Delaware Memorial Bridge and the Port of Wilmington to expand the area’s maritime presence.

A study commissioned by the International Longshoreman’s Association (ILA) projects the first phase of the project costing between $400-600 million, which they expect to be footed by private investors.

“I know these numbers. I was around during the ‘90s and I know what I’m talking about. I’ve examined this thing for hundreds of hours,” said Gordon.

“We are blessed with a location that is second to none. You will have so much work coming out of there and we’ve only begun to think about the opportunities. There could be 20,000 jobs very easily.”

He also says that’ll “reduce crime in the City of Wilmington 80 to 90 percent overnight” and that he’ll resign if it’s not true.

Prepared by consulting firm Paul F. Richardson Associates Inc., the report notes that neither the Port of Wilmington’s — nor the Port of Philadelphia’s container traffic broke the top 11 busiest harbors in the first half of 2014. That’s despite being located in the second-busiest trade lane in America, topped only by the Port of Los Angeles on the West Coast.

Part of that is due to the largest container ships not being able to travel up the Christina River. Dredging the channel to 45 feet has been an ongoing project for years and the proposed port would need its harbor point deepened as well.

Overall, the report projects nearly tripling the amount of cargo currently offloaded at the Port of Wilmington and estimates reaching that total within four or five years of the ribbon cutting.

Proponents also hope to use the shuttered GM plant on Boxwood Road as a distribution center, using the site’s railroad connection as a launching point to the rest of the East Coast.

Rail access could play a prominent role according to Gary Warren, President of the Delaware Farm Bureau.

He says his colleagues tell him Midwestern grain is backed up along heartland rivers just looking for a sea route.

Linking up with sites along the Great Lakes could also prove lucrative, as ports in Chicago, Ill., and Montreal, Canada are among the largest trade sites in North America.

No private investors have come forward and the project would need to adhere to environmental regulations in the Coastal Zone Act. A consultant from Paul F. Richardson Associates says the state will “push it through” that regulatory process.

Carney says he supports new initiatives to help bolster the middle class, but that there are still unanswered questions surrounding the project.

“The two big ones are the feasibility of the private investment and then what those private investors are going to want in terms of a public/private partnership,” he said.

Gordon says he hopes the project will be done within two-and-a-half years.