Oil shipments across Washington could triple by 2020

Nearly 3 billion gallons of crude oil will move through Washington on trains this year, and that figure could triple in five years. 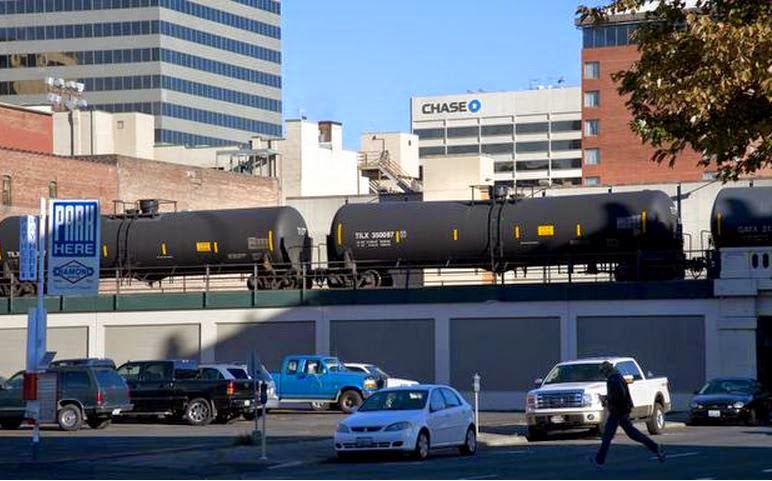 Communities along the route and state regulators aren’t ready for the current volume of oil trains – about 19 per week, each about 100 tank cars – let alone the expected surge in oil traffic, according to a preliminary state report, which is the subject of a Tuesday hearing in Spokane.

Among the findings:
• Sixty-two percent of local fire districts along oil train routes say their firefighters don’t have the necessary training or equipment to respond to tank-car derailments. Derailments caused a string of fiery explosions in the U.S. and Canada over the past 18 months, including the July 2013 accident that killed 47 people in Lac-Megantic, Quebec.
• Nearly 3 million Washington residents live in cities on or near oil train routes.
• The report recommends $13 million worth of actions to increase the state’s preparedness. The list includes hiring eight railroad inspectors; more money for the state’s oil spill response and prevention program; additional firefighting and spill containment equipment; and financial guarantees from oil shippers that they could cover cleanup costs and damages from a spill or derailment.
“The key to protecting the public and environment is the prevention of derailments and rail accidents in the first place,” the report said.
Washington Gov. Jay Inslee will use the 110-page report to develop a proposal to send to the Legislature next year. The plan will include efforts to get industry to pay for some of the costs, possibly through a renewed effort to enact a state barrel tax on oil.
Local residents will get a chance to weigh in at Tuesday’s hearing at the Doubletree Hotel. State officials have scheduled 3 ½ hours for testimony.
“We’re expecting a lot of people,” said Lisa Copeland, a Department of Ecology spokeswoman. “We wanted to stay as long as necessary to give everyone a chance to be heard.”

With nine serious oil train derailments in North America since 2013, there’s a lot at stake for Spokane and other communities along the route, said Ben Stuckart, Spokane City Council president.
Two to three oil trains pass through Spokane daily before heading south along the Columbia River en route to refineries or ports in Western Washington, Oregon or California, according to BNSF Railway.
“It’s pretty scary, if you think about Spokane specifically,” Stuckart said. “There are so many points that connect with the train tracks.” In addition to schools, neighborhoods and the city’s downtown, an oil train derailment could affect commuters on Interstate 90, a city wellhead and the Spokane River, he said.
Stuckart said the state report, while valuable, doesn’t address the real public safety risk: the volatility of North Dakota’s Bakken crude. He said the state should look into requirements for stabilizing the crude, a process that reduces its explosiveness by separating out flammable compounds.
The idea has been discussed in North Dakota, where the governor recently held a public hearing on the topic. In Texas, a light crude with similar properties must be stabilized before it can be transported by pipeline. But oil industry executives oppose stabilizing Bakken crude, saying the process is too costly.
Copeland, from the Ecology Department, said agency officials are aware of stabilization, but said the concept is still in the development stage.
In addition to Bakken crude, the state’s report addresses oil from Canada’s tar sands. Most of that oil is shipped through Washington by pipeline, but some is transported by rail.
Oil from the tar sands isn’t as explosive as Bakken crude, but it has environmental risks because of its weight. It sinks to the bottom of rivers and lakes, and it’s difficult to remove. A 2010 spill in Michigan’s Kalamazoo River required hundreds of millions of dollars to clean up.
In Washington, most of the projected growth in oil shipments comes from Bakken crude. At Washington refineries, the North Dakota crude is making up for declines in oil production and shipments from Alaska’s North Slope.
However, oil from Canada’s tar sands could become a much larger player in Washington’s rail shipments in the future, the state report said. Unlike domestic crude, which must be refined in the U.S., Canadian crude can be shipped overseas from Washington ports.

BNSF Railway, which ships the majority of crude oil across Washington, is still reviewing the state’s findings, said Gus Melonas, a company spokesman. But the railroad is also committed to safe oil transport, he said.
“Our railroad is a perfect geographic fit for shipping oil,” Melonas said. BNSF’s tracks run through the Bakken oil fields to West Coast refineries. Federal law requires the railroad to ship all types of freight, he said. “We don’t control what we haul, but we control how we haul it.”
Over the past three years, BNSF has spent nearly $500 million on track maintenance and improvements, mostly in the corridor between Spokane and the Columbia River.
This year, the rail lines were replaced on Spokane’s train bridges. Trains slow down to speeds of 30 mph or less through the downtown Spokane corridor, Melonas said. Railroad employees also inspect that track daily.
BNSF has specially trained crews that respond to fires and derailments, Melonas said. The railroad also has spill and fire response equipment stationed throughout the region. Trailers with foam suppressants are located in Seattle; Vancouver, Washington; Pasco and Whitefish, Montana. In the event of an oil train fire in another location, a trailer would be trucked to the site.
Though the state report said railroads aren’t doing enough to work with local emergency responders, Melonas said that effort is well underway. Over the past two years, BNSF has provided hazardous materials training to 1,600 local emergency responders. That training includes responding to an oil train derailment, he said.
Another 142 Washington firefighters are receiving crude-by-rail training at a railroad research facility in Pueblo, Colorado.
City fire departments in Spokane, Spokane Valley and Cheney are among the departments that reported having training and equipment to respond to an oil train derailment, according to the state survey.
Opinions expressed in this blog are those of the author, and do not necessarily represent the positions of the Moving Forward Network or its members. All errors are the responsibility of the author.