Union demands change as 75% of freight train engineers report nodding off, being exhausted

By John Nicol and Dave Seglins, CBC News Posted: Oct 07, 2014 5:00 AM ET Last Updated: Oct 07, 2014 7:43 AM ET
Train operators in Canada’s burgeoning freight rail industry report falling asleep at the controls and coming to work exhausted at an alarmingly high rate, according to an ongoing CBC News investigation into rail safety.
“I have had instances where I have just snapped back into reality, and kind of, for a few seconds, not really realized or recognized where I am,” one Ontario-based CN rail engineer told CBC News, recalling how he’d missed a signal at the controls of a three-kilometre-long train.
“We came around a curve looking at a stop signal. Had I not taken the necessary action at the necessary time, we would have been in trouble.
“We may have caused an incident, and we may have cost somebody their life.”
The engineer is one of more than a dozen current and retired rail workers who contacted CBC News following the Lac Megantic rail disaster. These rail workers warned that chronic exhaustion among locomotive operators is one of the biggest issues facing the industry.
Some spoke on condition of anonymity, for fear of losing their jobs, and admitted to falling asleep, missing stop signals and putting lives, cargo and communities at risk.
The core of the problem, they say, goes beyond long shifts or being expected to sleep in their off-time on makeshift beds far from home.
Moreover, most freight train engineers have no firm schedules and are, instead, on-call, 24/7, never knowing when or how long to sleep.
Transportation fatigue expert Clinton Marquardt, who for the past 11 years has worked for or alongside the Transportation Safety Board (TSB) on 91 accident investigations, told CBC News the issue is too large to be ignored.
“My biggest fear,” Marquardt said, “is that we have a catastrophe like Lac Megantic that will be attributable to fatigue.”

75 per cent admit to falling asleep

The sleep issue has plagued the industry for years. In 1986, 23 people died after a CN freight train crashed into a VIA passenger train in Hinton, Alta. Investigators suspect the CN crew fell asleep, and cited scheduling practices as a major safety risk.
Despite numerous attempts to resolve the fatigue issues — often in negotiations between rail companies and the unions— the problem persists. Although it is difficult to determine tiredness as a factor, TSB investigators have looked at fatigue as an issue in more than a dozen accident investigations over the past decade. 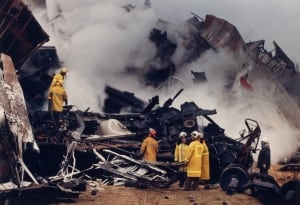 This spring, Transport Canada’s Fatigue Management Working Group designed a survey to determine the extent of the problem. In May, senior TC officials inexplicably pulled the plug on the research. Instead, a union involved in the discussions, the Teamsters Canada Rail Conference (TCRC), took the survey plan and independently polled its members early this summer.
The results are startling.
Of the 1,909 respondents, 1,790 were freight train operators and three-quarters of those surveyed reported falling asleep while working at least once in the month prior to the survey. Ninety-six per cent say they have gone to work tired, with 62 per cent reporting it happens “frequently” or “always.”
Of those freight engineers who booked off due to fatigue, 43 per cent say they faced investigation and/or discipline.
“I think we have heard about truck drivers that fall asleep at the wheel — that’s dangerous stuff,” said Rob Smith of the TCRC, who sits on Transport Canada’s working group. “At least they can pull over and have a nap. That doesn’t happen on a freight train.”

Marquardt says other transportation modes, like the trucking and airline industries, have a better grip on the dangers of sleep and proper scheduling.
Airline crews know when they are going to work a month ahead of time, Marquardt says, whereas the freight rail industry decides on call work assignments hour by hour. “So their sleep is frequently occurring at all times of day or night and that’s very difficult for the body to adjust to.”
In 2009, Marquardt and the TSB took a close look at a collision between two CP freight trains in North Portal, Sask. Eight tanker cars of gasoline collided with train cars carrying automobiles, derailing and damaging a locomotive and 24 cars. Fortunately, no one was hurt.
However, Marquardt discovered the engineer had worked 28 shifts in the previous 30 days. It was all within the existing “work/rest” rules, but each shift started at a different time of day.
Marquardt conducted a “bio-mathematical” analysis of the operator’s sleep over the previous 30 days and concluded on six different shifts he would have been so sleep-deprived, it was as though he’d been drunk.
“So that’s the first time when I realized how big this problem was,” added Marquardt.

Neither the Railway Association of Canada, the freight industry’s main lobby group, nor either of the two major freight carriers in Canada would grant CBC interviews on the issue, despite two months of repeated requests.
In a statement, CP Rail said it observes strict rules and employs specialists and “fatigue modelling software” to develop scheduling and mandatory fatigue management plans to help employees get sufficient rest.
CN Rail also declined an interview but indicated in an email it too employs some limited “time pools” at select locations “to bring a greater degree of scheduling.” The company noted the issue is at the forefront of recent labour negotiations with the TCRC, the main engineer and conductor union.
A western Canadian CP Rail engineer told CBC that with all the recent emphasis on profit and cutting jobs, there is even more pressure on those who drive trains.
The engineer says he uses all kinds of strategies to keep awake — “opening the window, drinking coffee, talking, turning the lights on and off.” But he admits to going to work tired because “we’re all a slave to the dollar.”
His solution is for someone to referee the divergent financial interests. “I would ask Transport Canada to work with the unions and the companies to implement strategies to reduce fatigue.
“My fear is that I’m going to lose my job for speaking out. But I want a better life for myself, I want a better life for my family, and I want a better life for my fellow coworkers.”
For tips on this or other stories, contact John Nicol orDave Seglins.
Opinions expressed in this blog are those of the author, and do not necessarily represent the positions of the Moving Forward Network or its members. All errors are the responsibility of the author.