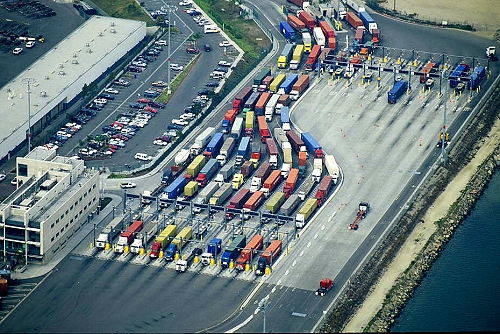 PierPass Inc. is launching a program in Los Angeles-Long Beach that could lower truck turn times for large importers to as little as 11 minutes, compared to the 45 to 60 minutes it generally takes now when terminals are operating efficiently.
The concept behind Free-Flow, as the program is called, is to segregate the containers of large importers into a designated location in the yard as soon as the boxes are removed from the vessel. Trucking companies that participate in Free-Flow will then send an armada of trucks to the terminal, through a designated lane, directly to the importer’s stack.
Bruce Wargo, president and CEO of PierPass, the organization that manages the extended gates program in Los Angeles-Long Beach, said that if Free-Flow works as planned, it will give premier service to large accounts, while also relieving truck traffic in the rest of the terminal.
This is one more step by terminal operators to relieve congestion in an era of big ships operated by big carrier alliances. “To keep cargo flowing quickly as ships grow ever larger, we need to change how we move containers,” Wargo said. “Doing the same things incrementally faster won’t solve congestion pressures.”
Wargo believes that at full roll-out, Free-Flow could capture 30 percent of the container moves at participating marine terminals. That achievement would significantly reduce truck turn times for large customers, and help terminal operators improve productivity for the remaining 70 percent of their customers.
Participating cargo interests must have at least 80 containers coming off of a single vessel. Participants can be big-box retailers and other large importers, or they can be cargo consolidators (non-vessel-operating common carriers) that pool the volumes of several importers.
Since containerization began in the 1960s, containers have been unloaded from vessels and moved directly to container stacks without regard for the consignee. When the importer sends its trucker to the terminal, the driver is directed to the appropriate stack, and often waits as the transtainer operator digs through a five-high stack of containers to retrieve the box the trucker will pick up.
Under Free-Flow, all of the containers for a single importer are cleared and placed in a designated stack. When there is sufficient volume, the trucking company dispatches dozens of drivers to the terminal, and they proceed directly to the stack where the containers are ready to be picked up.
Of course, this system requires close communication among all of the stakeholders — the importer, the shipping line, the customs broker and the trucking company. “A lot of planning is required,” Wargo said.
Several terminals have been conducting trial runs of Free-Flow. “At best, trucking companies have reported turn times as short as 11 minutes, compared to 45 minutes for a typical transaction,” Wargo said.
The productivity of individual cargo-handling machines is expected to skyrocket. At present, one rubber-tired gantry crane in the yard averages about eight to 10 container deliveries per hour. Wargo anticipates that under Free-Flow a single RTG will be able to deliver 20 containers per hour.
Three of the 13 container terminals in Los Angeles-Long Beach are on board right now, and he expects an additional three terminals to join Free-Flow soon.
Eventually, terminals may be able to work with shipping lines to block-stow containers for large customers when they load the vessels in Asia. Also, efforts are needed to coordinate chassis availability as the individual terminals come on line, Wargo said.
Although 80 containers for a single customer is the minimum requirement, bigger importers often have much more volume than that. A recent vessel call had 300 containers for a single importer coming off of the ship, he said. NVOs and other logistics providers are also expected to join in by pooling the cargo volumes they control from multiple customers.
The residual benefits for non-Free-Flow shippers will also materialize, Wargo said. If as many as 30 percent of the trucks entering a terminal move directly to Free-Flow stacks, that will reduce significantly the number of trucks going to the other stacks.
Wargo said all of the terminals in the harbor support Free-Flow in concept. He expects other terminals to participate as the process is refined and proves its value. “This does require change, and the assets, to make it work,” he said.
Contact Bill Mongelluzzo at bmongelluzzo@joc.com and follow him on Twitter:@billmongelluzzo.
Opinions expressed in this blog are those of the author, and do not necessarily represent the positions of the Moving Forward Network or its members. All errors are the responsibility of the author.