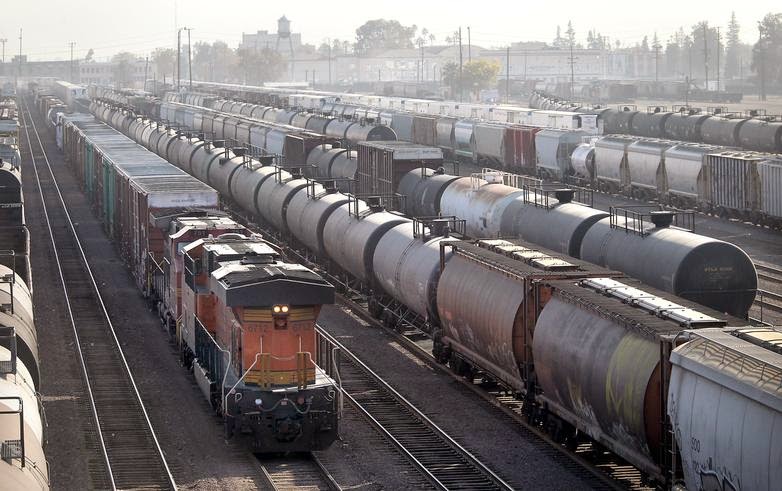 The Kern County Board of Supervisors voted 5-0 Tuesday to approve Alon USA Energy Inc.’s controversial plan to bring in two mile-long oil trains per day through Bakersfield.
Dismissing environmentalists’ worries of a catastrophic spill, board members expressed confidence that Dallas-based Alon and BNSF Railway Co., the company operating the trains, would handle the Rosedale Highway project safely and with minimal harm to air quality.

Print
The $170 million project would not expand the 70,000-barrel-per-day plant’s refining capacity but upgrade it so it can process various grades of oil. It is expected to create 200 construction jobs, restore another roughly 200 positions at the mothballed plant and help reduce California’s dependence on foreign crude.
It is believed to be the largest oil-by-rail project approved in California. Together with Houston-based Plains All American Pipeline LP’s separate rail-to-pipeline project expected to take in the same volume of oil near Taft, Alon’s plan would boost Kern County’s receipt of domestic crude by train from less than 1 percent of the state’s oil supply to about 13 percent.
Not all the oil hauled into the refinery would necessarily be processed there. Following detailed engineering work and nine months of construction, Alon’s project would receive as much as 150,000 barrels a day, or roughly twice the plant’s refining capacity.
Whatever isn’t processed on site would be sent by pipeline to other refineries in the state.
While the company’s plans would allow it to ship out all 150,000 barrels per day by pipeline, essentially passing through Bakersfield untouched, Alon President and CEO Paul Eisman denied that was the plan.
Eisman disputed a report, published Tuesday by Oil Price Information Service, saying he and his management team recently told Barclays Capital that Alon has not decided whether to restart the refinery or when it might make such a decision.
“It’s our desire, our full intent, to restart the Bakersfield refinery,” he said, characterizing Barclays’ reported comments as “a disconnect” or miscommunication.
Eisman did not say when the reconfigured refinery would reopen, but county supervisors said they understood it would resume operation in the second half of next year.
Alon’s refinery on Rosedale has operated at minimal capacity since late 2012, when unfavorable conditions in the asphalt market reduced its profitability. The plant has not run at full capacity for 12 consecutive months since 2008.
County supervisors, facing hundreds of project supporters in the audience Tuesday and only a handful of opponents, said at the public hearing that jobs and economic impact were a main motivation for their support of Alon.
But board members noted the county’s approval came with important concessions from
Alon, including a requirement it hire at least half its construction workers locally. The board further insisted all 104 cars or so per shipment be accommodated entirely on Alon’s property, and that the oil be shipped on cars with the most advanced safety features available.
Alon has also promised to pay for on-site fire response equipment and supplies, and submit to yearly safety reviews.
Just before the late afternoon vote, board Chairwoman Leticia Perez noted Kern is an oil county that has also permitted many renewable energy projects. She said Alon’s project strikes “an excellent balance, all things considered.”
“This is an excellent opportunity to expand what we do here,” she said, “and put folks to work.”
Representatives of four different environmental activist groups present for the hearing asserted the county’s review of the project was faulty, in part because of a math error they said made the project appear five times safer than it really is.
The county’s planning director, Lorelei Oviatt, disputed the claim but stopped short of denying it altogether.
A speaker from the Arizona-based Center for Biological Diversity, Ash Lauth, noted the refinery expects to process what she characterized as “ultra-explosive” oil from North Dakota’s Bakken shale formation. Oil from that state is commonly shipped across the country because a bottleneck in North Dakota has lowered its price relative to other crudes.
Bakken oil has been the focus of much study and policymaking since a series of explosive train derailments involving North Dakota crude.
One such accident in Canada in July 2013 killed 47 people, prompting emergency measures in the United States and other changes still under consideration in Washington.
Oviatt told the board her staff had conducted an “independent, extensive review,” and it remains unclear whether Bakken is more volatile than other oils.
Opinions expressed in this blog are those of the author, and do not necessarily represent the positions of the Moving Forward Network or its members. All errors are the responsibility of the author.