On Friday, the Chicago Tribune broke news of a new EPA study of a BNSF intermodal facility, showing high amounts of Particulate Matter and black carbon are blown across nearby neighborhoods when rail yard activity peaks. 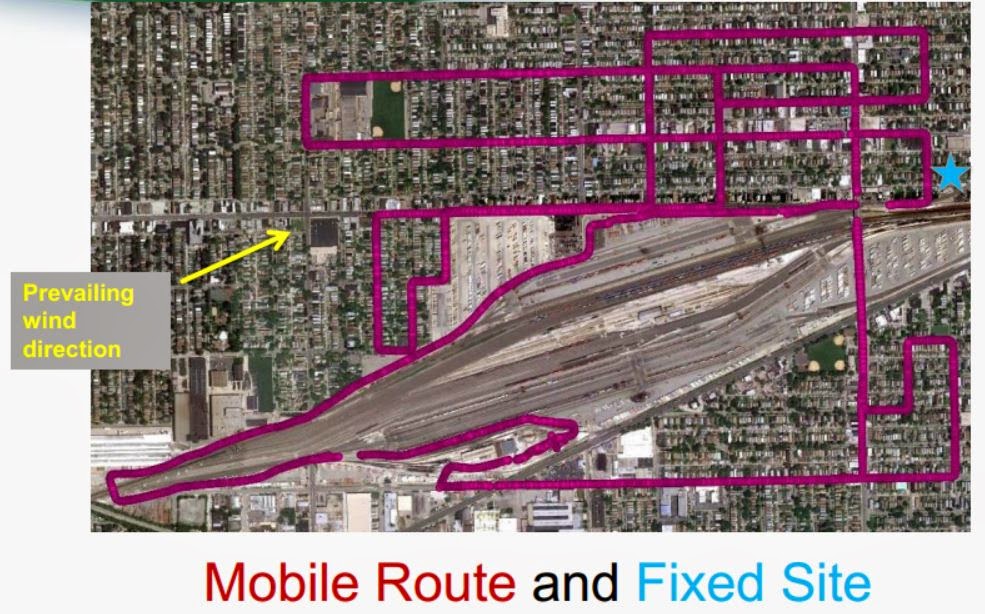 The Chicago Tribune news article is below.

June 27, 2014|By Michael Hawthorne and Alex Richards, Tribune reporters
Diesel pollution from locomotives and the vehicles that move freight containers between trains and trucks. wafts into the neighborhood north of the BSNF Cicero Intermodal Facility. (Chuck Berman / Chicago Tribune)
From the sidewalk in front of her apartment in Cicero, Yolanda Foster can see long freight trains and an endless line of trucks rumbling day and night through the sprawling rail yard across the street.
What she can’t see are the clouds of microscopic lung- and heart-damaging particles that drift into the low-income, largely Latino neighborhood overlooking one of the Chicago area’s freight terminals.

New research from federal scientists has found that levels of diesel soot in residential areas near the BNSF Intermodal Facility frequently spike higher than the national average for urban areas. The study, the first of its kind in Chicago, sheds light on health hazards posed by freight yards that are concentrated in some of the area’s poorest communities.
“You wonder if somebody’s exhaust pipe is in your window,” said Foster, a retired nurse who has lived across from the west suburban yard for three years. “On some days you can smell the fumes. It’s hard on our system.”
The Cicero yard is among more than a dozen facilities in Chicago and the suburbs where giant cranes move steel containers between trains and trucks. Nearly 340,000 people, including 38,000 children younger than 7, live within a half-mile of one of the intermodal terminals, according to a Tribune analysis of census data. More than 80 percent are Latino or African-American.
Diesel exhaust from the equipment contributes to the Chicago area’s chronic problem with soot pollution, which can trigger asthma attacks, cause heart damage and take years off lives. Federal officials say they have little power to do anything about it.
Unlike factories and power plants, the diesel locomotives and trucks maneuvering around or passing through freight yards aren’t subject to federal rules that require the latest pollution controls. New or refurbished diesel engines must be cleaner, but many older locomotives and other equipment can legally keep operating for years.
Chicago has been a major rail hub since the 1800s, prompting decades of conflict between industry demands and the quality-of-life concerns of neighboring residents. The South and Southwest sides remain critical junctions in a freight system that today relies on modular containers exchanged between ships, rail cars and trucks.
More than 7 million containers were transferred at Chicago area intermodal terminals in 2012, according to the Chicago Metropolitan Agency for Planning. Railroads promote the system as a economic engine that employs thousands and cuts pollution by reducing truck traffic.
Most of the companies that operate freight yards in the area say they have been taking steps to reduce diesel pollution.
“BNSF has continued to install cleaner diesel technology on numerous vehicles, including shuttle trucks, container cranes and switch engines,” Amy Casas, a company spokeswoman, said in an email response to questions.
Recent efforts to clean up aging locomotives and other freight equipment come as scientists increasingly raise alarms about the health costs of diesel pollution. Breathing even small amounts can inflame the lungs and trigger asthma attacks, studies have shown. Other research links exposure to cancer, heart attacks, brain damage and premature death.

Researchers from the U.S. Environmental Protection Agency chose to study the Cicero freight yard because they determined there were no major highways or other big sources of pollution nearby to muddle the test results. About 418,000 containers were transferred at the facility in 2012, making it a mid-sized intermodal terminal by Chicago standards.
The EPA study, released publicly after months of Tribune requests, adds to other recent research that details how intermodal yards create hot spots of soot extending well beyond the clusters of locomotives, trucks and other diesel-powered equipment.
EPA scientists installed a temporary pollution monitor just north of the BNSF yard in 2011 and took measurements for six months. They also drove a Chrysler PT Cruiser loaded with monitoring equipment around surrounding neighborhoods to get an idea of how much pollution people are breathing every day.
The testing revealed that levels of black carbon, an indicator of diesel exhaust, spiked up to 104 percent higher than the norm for urban areas during early mornings and evenings when winds blew across the freight yard toward a residential area north of 26th Street and west of Cicero Avenue.
“We’ve known for quite a while that pollution levels are higher close to highways,” said Gayle Hagler, the lead EPA researcher. “But we’re only now getting a handle on how these large freight facilities affect neighboring communities and contribute to regional pollution problems.”
Casas, the BNSF spokeswoman, said the EPA study didn’t prove the Cicero rail yard was responsible for all diesel exhaust detected by the monitoring equipment. She also said the railroad is reducing emissions by buying cleaner locomotives, taking steps to reduce idling and installing equipment that helps cut the amount of time trucks spend at freight yards.
Though the EPA researchers did not attempt to gauge potential health risks in Cicero, extensive studies conducted in California during the past decade concluded that people living close to intermodal yards face significantly higher cancer risks than others who live at least four miles away.

Another peer-reviewed study published last year found that children living near a freight terminal in San Bernardino, Calif., were twice as likely to have asthma attacks as those who lived five miles away.
“This presents a huge challenge for the rail industry,” said Scott Fruin, an environmental health researcher at the University of Southern California who studies pollution from passenger and freight traffic. “Some of their equipment can be pretty dirty.”
The EPA’s testing near the Cicero yard supports earlier computer modeling that predicted emissions from the facility and others like it would make it difficult for the Chicago area to meet federal standards limiting fine particulate matter, commonly known as soot.
Chicago also is the nation’s only major metropolitan area that fails to meet tough new standards for smog-forming nitrogen oxide, another ingredient in diesel exhaust.
Industry representatives and government regulators promise that cleaner locomotives and trucks are on the way. But older, dirtier diesel engines can legally remain on the rails and roads for decades, making it more difficult for Chicago and other urban areas to clean up the air.
Despite little authority to order changes, federal and state officials have persuaded railroads to clean up some of their equipment with grants financed by fuel taxes. About $110 million has been awarded to rail companies in the Chicago area during the past five years.
“We still have 1950s-era locomotives operating in our region,” said Doug Ferguson, manager of the grant program at the Chicago Metropolitan Agency for Planning. “If they don’t need to replace them, why would they? This is how we can push them to do something.”
One of the railroads taking advantage of the program is Norfolk Southern, which faced a storm of public complaints last year when it sought policy changes from Chicago officials that would clear the way for a massive expansion of an intermodal yard in the Englewood neighborhood.
An analysis by the nonprofit Environmental Law and Policy Center suggested the project would substantially increase pollution in an area plagued by high rates of asthma. Using an EPA computer model, the group estimated that worrisome levels of soot could spread several blocks beyond the site unless Norfolk Southern took more aggressive steps to clean up its diesel equipment.
After several aldermen raised questions, the railroad announced it would tap federal grants to help upgrade its 18 switcher locomotives in the Chicago area. Norfolk Southern also committed to replacing most of its diesel-powered equipment with cleaner models and to installing anti-idling devices at its freight yards.

Other railroads, including Canadian National, Canadian Pacific, CSX and Union Pacific, are taking similar steps.
“Safety and environmental stewardship are intrinsic to our culture and integral to our relationship with customers, employees and the thousands of communities CSX serves,” Carla Groleau, a company spokeswoman, wrote in an email response to questions.
Mark Davis, a Union Pacific spokesman, said: “We’re working hard to get ahead of this.”
It’s unclear how many of the trains and trucks at Chicago area freight yards have been cleaned up. But studies in California and Michigan found that replacing old switcher engines alone can significantly cut diesel pollution in surrounding neighborhoods.
Scientific research, along with pressure from community groups, has played a key role in pushing railroads to make equipment upgrades that are prominently featured on company websites. With intermodal freight projected to expand rapidly, those efforts are likely to intensify in Chicago and other rail hubs in coming years.
“All of these railroads and factories built close to houses are a reflection of Chicago’s history,” said Howard Ehrman, a physician and co-founder of the Little Village Environmental Justice Organization. “The technology is there to cut down on this harmful pollution. We just need to make sure the freight companies use it.”
mhawthorne@tribune.com
arichards@tribune.com
Twitter @scribeguy
Twitter @alexrichards
——————————–
The mission of the Moving Forward Network is to transform the global trade system by supporting the organizing, advocacy, education and research efforts of partners around the United States toward improving public health, quality of life, environmental integrity, labor conditions and environmental justice.  To learn more about the Moving Forward Network, please visit http://www.movingforwardnetwork.com/
Opinions expressed in this blog are those of the author, and do not necessarily represent the positions of the Moving Forward Network or its members. All errors are the responsibility of the author.