This one-day meeting, hosted in Baltimore by the EPA, brought together ports stakeholders from around the country for the expressed purpose of exchanging ideas and developing principles to guide decision-making that supports environmental sustainability at ports. The event was designed to build on the outcomes of the three theme-based “listening session” webinars conducted by the EPA over the last eight months. A range of port-related interests were represented, including port authorities; trade associations; terminal operators; local, state, and federal government agencies; and a handful of community-based organizations. The packed agenda included presentations by industry leaders, panel discussions and breakout working sessions. During lunch, six ports facilities were recognized as recipients of the 2013 competition for grants under the Diesel Emissions Reduction Act (DERA).
As a resident and environmental justice organizer of a port adjacent community, I was keenly aware of the gap between proposal and on-the-ground truth. Several presenters spoke about truck replacement programs as the key to cleaning up port-generated diesel pollution. With less frequency, however, was there recognition of the fact that programs that hinge on poorly paid, misclassified port truck drivers taking out loans to buy new, cleaner trucks are going to be a slow go and based on hardship for one of the most vulnerable links in the goods movement system. 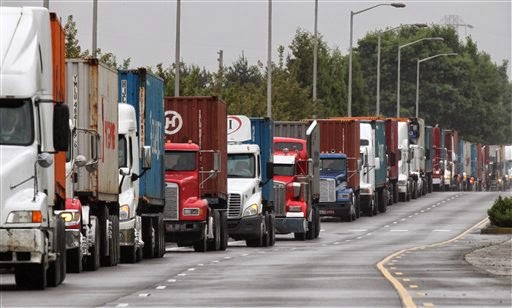 Source: AP
A high point was the address by Dr. Robert Bullard, Dean of the Barbara Jordan-Mickey Leland School of Public Affairs at Texas Southern University, who spoke during the morning plenary session. Dr. Bullard is a pioneer of the environmental justice movement and his talk was uncompromising in reminding the audience of the links between health and environment. “Port improvements have to extend to the neighborhoods and improve their livability and sustainability,” said Bullard. “Communities have got to be part of decision-making and they need resources to be able to participate. Wealth and health are correlated,” said Bullard. “Zipcode is still the most important indicator of health.” 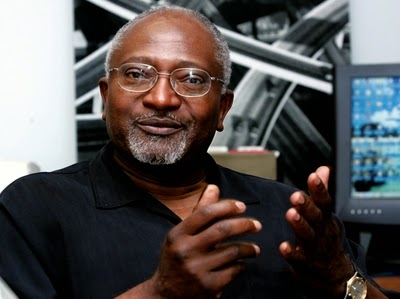 Source: drrobertbullard.com
The Summit was followed by a half-day meeting on April 9, which several community groups attended. We are in the process of writing a collective report, which will be shared with the Moving Forward Network shortly.
Cynthia Mellon
Ironbound Community Corporation
Newark, NJ
Opinions expressed in this blog are those of the author, and do not necessarily represent the positions of the Moving Forward Network or its members. All errors are the responsibility of the author.