Diane Bailey, Senior Scientist with the National Resources Defense Council, and central participant in planning for the Moving Forward Network, is quoted in this excellent article from the McClatchy Washington Bureau.

More information on oil transportation by rail in California:

As Oil by Rail Gains Momentum, Is California On Track to Protect Human Health and the Environment?, Legal Planet 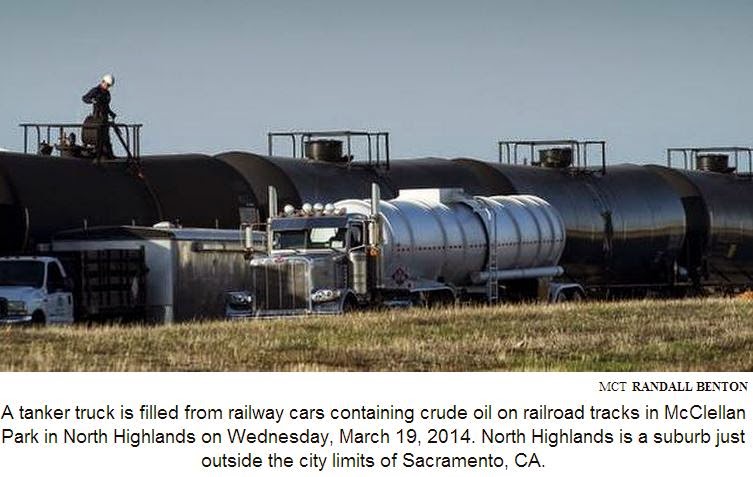 SACRAMENTO, Calif. — As rail shipments of crude oil have risen in Northern California, so has opposition in many communities along rail lines and near the refineries they supply.
Concerned about the potential safety and environmental hazards of 100-car trains of oil rolling through population centers, leaders from Sacramento to San Jose say they’re banding together to present a unified voice for “up-line” cities: communities that could bear some of the highest risks as California turns toward rail shipments to quench its thirst for fuel.
“What I suspect will come out of this is more of a regional understanding and interest in the topic,” said Mike Webb, director of community development and sustainability in Davis.
The federal government regulates rail shipments, but the rules haven’t caught up to the surge in oil traffic on the nation’s rail network. That’s left local leaders at the forefront of pushing for changes in state and federal laws.
Last week, the city councils of Berkeley and Richmond voted to oppose crude shipments on rail lines through their towns. The resolutions call for state lawmakers and members of Congress to seek tougher regulations.
Several environmental groups filed a lawsuit last week against pipeline operator Kinder Morgan and the Bay Area Air Quality Management District. The groups said the agency quietly issued a permit to Kinder Morgan for a crude-by-rail facility in February without reviewing potential environmental and health impacts.
“We don’t accept that as a forgone conclusion,” said Diane Bailey, a senior scientist with the Natural Resources Defense Council, one of the groups in the lawsuit.
But it may be an uphill fight. State officials anticipate that within two years, California will receive a quarter of its petroleum supply by rail. That could potentially mean several trains of crude oil passing daily through Sacramento, West Sacramento and Davis.
The Sacramento Bee reported last week that crude oil had been transferred from trains to trucks at the former McClellan Air Force Base in Sacramento since last year without the knowledge of local emergency response officials and without a required air quality permit.
Webb said Davis’ goal is to be part of the review process to make sure the city’s concerns are heard.
“Our primary objective and interest is in the health and safety of our community,” he said.
A group of community activists in Benicia and Martinez has been trying to stop two oil refiners, Tesoro and Valero, from expanding their crude oil deliveries by rail. And they’re pressing local, state and federal officials to push for tougher oversight of crude oil shipments by rail following a series of derailments with catastrophic fires and spills.
They’re focused on two types of crude oil that are moving by rail in the absence of new pipelines. First is tar sands, a thick, gritty crude that’s produced in western Canada. Tar sands production generates more carbon dioxide emissions, environmentalists say, and is more difficult to clean up when spilled in water because it’s heavy and sinks.
The second is Bakken crude, extracted through hydraulic fracturing of shale rock. Most of the Bakken formation lies in North Dakota, and most of the oil produced there moves out of the state by rail. The oil has proved more volatile than conventional types.
Since last summer, three major derailments have involved Bakken crude. The first, in Lac-Megantic, Quebec, killed 47 people in an inferno that also leveled the center of the small lakeside town.
Subsequent derailments in Alabama and North Dakota, though not fatal, showed that disaster could strike again.
“People are afraid that anybody along the rail line could become the next Lac-Megantic,” said Andres Soto, a community activist in Benicia.
Part of the frustration at the local level is the lack of information about how much crude oil is being shipped on rail lines. The companies involved in transporting and refining oil are not required to provide much information on the shipments and usually don’t.
“There is so little oversight,” Bailey said. “This is a new area and people are scratching their heads, saying, ‘Wow, this isn’t covered.’”
West Sacramento Fire Chief Rick Martinez, who has experience fighting oil fires, said national attention on the issue may provide a platform for cities to push for better real-time information on what materials are coming through town, so emergency responders know what to expect as they head to a call.
“Is there way through technology to get more information to local agencies?” he asked. “We are trying to take advantage of the interest to pose the questions.”
Tate reported from Washington. Bizjak reports for The Sacramento Bee.
Looking for comments?
Read more here: http://www.star-telegram.com/2014/03/31/5696634/as-oil-shipments-rise-on-rails.html#storylink=cp
y
Opinions expressed in this blog are those of the author, and do not necessarily represent the positions of the Moving Forward Network or its members. All errors are the responsibility of the author.