The Global Atlas of Environmental Conflicts was unveiled today.  As the sponsor,  the Environmental Justice Organisations, Liabilities and Trade (EJOLT) project, says on its Project Page (highlights are theirs):

As global consumption of resources and human populations increase, the search for energy and materials cause the “commodity frontiers” to expand. Along the entire global chain of production, from extraction, to processing, to disposal, the impacts of pollution are distributed unequally among populations.

I think this is a very important initiative, which could help bring disparate and geographically separated EJ movements together into a cohesive whole.

I would love to see more US conflicts added, and have reached out to EJOLT folks to see how we could help make that happen. 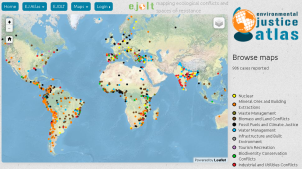 [BRUSSELS, 19 March 2014] The Environmental Justice Organisations, Liabilities and Trade (EJOLT) projectlaunches today its Global Atlas of Environmental Justice, a visually attractive and interactive online mapping platform detailing around 1000 environmental conflicts (and growing). It allows users to search and filter across 100 fields and to browse by commodity, company, country and type of conflict. With one click you can find a global snapshot of nuclear, waste or water conflicts, or the places where communities have an issue with a particular mining or chemical company. Click on any point to find the actors and a conflict description with the outcome and sources. Maps you create using the search and filter can be shared on your webpage or facebook. Featured maps will focus on issues ranging from fracking to conflicts over mega-infrastructure projects to maps on violent targeting of activists (and more).

The Atlas is a product of the EU-funded EJOLT project. Over 100 people from 23 universities and environmental justice organisations in 18 countries plus dozens of independent collaborators from all around the world have joined forces to create this huge and valuable resource. The project is coordinated by Professor Joan Martinez-Alier and his team of ecological economists from the Autonomous University of Barcelona (ICTA-UAB).

“The Atlas illustrates how ecological conflicts are increasing around the world, driven by material demands fed primarily by the rich and middle class subsections of the global population,” says Martinez-Alier. “The most impacted are poor, marginalized and indigenous communities. They usually do not have the political power to ensure access to environmental justice and health.” Over 2000 different corporations and financial institutions are involved. This includes many corporate and state actors from developed countries, but with growing participation from the emerging economies.

The Atlas will make it easier to find information, connect with other groups working on related issues and increase the visibility of environmental conflicts. It can also be used for teaching and advocacy work. For the moment, the map is similar to ancient world maps, with good coverage of some areas and blanks spots. The goal now is to reach out to many new civil society organisations and researchers with specific areas of expertise and invite them to contribute to expanding the base of knowledge.

A crucial feature of the project and the Atlas is that grassroots movements for environmental justice are the key for moving towards more just, equitable and less damaging forms of consumption and production. According to Atlas coordinator Leah Temper “Only once communities stand up and say we will no longer be polluted, will governments and companies change their behaviour.” Leah Temper will launch the Atlas at the 19 March Mapping Environmental Justice event in Brussels, which is co-organised by the European Environmental Bureau and the United Nations Environment Programme’s Liaison Office to the EU Institutions.

Notes to the Editor:

• Visuals are available on request.

Here is the pdf
Opinions expressed in this blog are those of the author, and do not necessarily represent the positions of the Moving Forward Network or its members. All errors are the responsibility of the author.