This is a great example of crowd-funded citizen science and community data.  After being turned down for funding by the EPA, this University of Washington study was funded by 271 people through the science crowdfunding site Experiment.com, and the Sierra Club Beyond Coal Campaign. 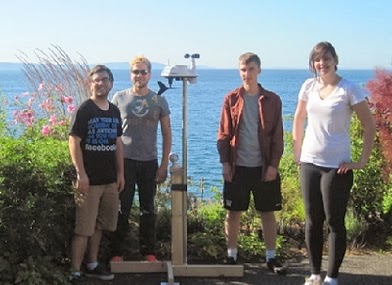 If you need another reason to oppose coal exports to China, take a look at some just-published research conducted by University of Washington atmospheric sciences professor Dan Jaffe and his team of students.
The study, peer-reviewed and published in Atmospheric Pollution Research, monitored air quality for one month last summer at a home overlooking Puget Sound in the Blue Ridge neighborhood of north Seattle. The home sits about 75 feet from two major rail lines.
When loaded coal trains passed by — there were 36 of them observed over a month’s time — the air quality monitoring equipment at the site measured spikes in not only small particles of airborne pollution from the train engine’s diesel exhaust, but also elevated concentrations of larger particles believed to be coal dust.
The team also measured particulate matter of less than 2.5 microns in size from the combination of 374 freight, passenger, coal and “other” trains passing the Seattle home. These particles can be 30 times more slender than a human hair and several thousand could fit on the period at the end of a sentence. This is a particle size that can travel deeply into someone’s respiratory system, causing lung and heart disease.
The concentration of PM2.5 in the air around the home rivaled air pollution levels in Seattle’s Duwamish industrial area, home to heavy concentration of diesel trucks, trains and ships.
Jaffe concluded that a 50 percent increase in train traffic would put some residences, such as the Blue Ridge home, near or over the annual average air quality standard of 12 microns per cubic meter of air for PM2.5.
The findings from Jaffe’s study are timely. They reinforce the fact that state and federal agencies currently reviewing environmental impacts of the two coal terminal projects need to answer some of the questions that Jaffe’s study couldn’t. For instance:
How does the concentration of PM2.5 vary based on proximity to the rail line?
What are the health effects of diesel exhaust and coal dust from trains?
Jaffe is the first to admit the limits of his study. For instance, it’s a snapshot in time. A follow-up study should run for at least a year, he suggested.
However, he said of the state and federal environmental agencies: “They can’t ignore our study.”
About a year ago, Jaffe and his colleagues sought funding from the U.S. Environmental Protection Region 10 office Seattle, the state Department of Ecology and the Puget Sound Clean Air Agency to conduct the study, which also included air quality monitoring of trains passing through the Columbia River Gorge.
“They felt the data would be useful, but the money wasn’t in their budgets,” he said.
With help from fellow UW atmospheric sciences professor Cliff Mass and his popular online weather blog, the study team turned to crowdfunding to raise money. Some 270 donors contributed more than $20,000 via microyza.com, which has since changed its name to Experiment (experiment.com).
Experiment has opened its platform to both independent and university-backed scientists. Crowdfunding for science research is helping fill the financial void caused by cutbacks in university and federal grants.
“There are a lot of politics involved, and really the only researchers that get funded already have a track record,” Experiment co-founder Cindy Wu said in an interview with VentureBeat, a technology news media. “There is a huge subset of scientists being neglected.”
The Sierra Club, an environmental group with a “Beyond Coal Campaign” underway in the Pacific Northwest, also pitched in $5,000 for the $25,000 study headed by Jaffe.
“Coal dust is a real problem all along the route of these coal trains,” said Robin Everett, regional organizer of the Sierra Club campaign. The Sierra Club has also called for a more in-depth study of what Jaffe’s group started.
Mass, whose weather blog has topped 14 million page views since its inception in 2008, shared the results of the Jaffe study with his online viewers last week.
“Coal trains are environmental and economic disasters that are not worth the handful of train and terminal jobs they would produce,” Mass concluded. “Wherever you are on the political spectrum, you should be against these trains.”

Read more here: http://www.theolympian.com/2014/03/11/3027518/study-a-window-into-coal-train.html#storylink=cpy
Opinions expressed in this blog are those of the author, and do not necessarily represent the positions of the Moving Forward Network or its members. All errors are the responsibility of the author.