In our inbox this morning –  interesting background on the Southern California Intermodal Gateway, from yesterday’s LBREPORT.com – item #4 in their list of “City Hall Outrages of 2013.” 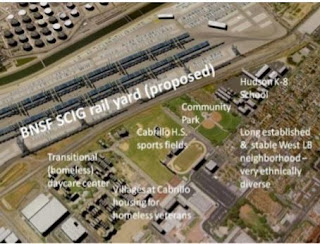 4. Council Evades Up or Down Vote On Proposed WLB Railyard, Mayor Proposes Mitigation. Not Relocation: In 2013, the Long Beach City Council continued to evade an up-or-down vote on whether or not to oppose BNSF’s proposed SCIG railyard where the RR wants it: next to a WLB neighborhood. Two major neighborhood groups directly impacted by the proposal — the West LB Association and the Wrigley Area Neighborhood Alliance — say railyards belong in the Ports, not in neighborhoods. Mayor Foster then undercut the grassroots’ groups position, by urging “mitigation” that would keep the railyard where BNSF wants it.

What exactly would you accept as “mitigation” for a massive railyard in your neighborhood? Money? Shrubbery? Asthma inhalers? Yes, the City Council agreed to file a lawsuit challenging the railyard EIR, but that invites politicians to settle the case in exchange for shrubbery, money and asthma inhalers. At a November 2013 Mayoral forum, candidates who attended were asked point blank if they supported the BNSF railyard project. To hear their answers, For audio, click here. (Some candidates, including the LB Chamber-PAC backed Damon Dunn, declined to attend the forum.)
None of those attending said the words we wanted to hear: on-dock rail. Long discussed but not delivered (apart from short transfer line inside the PoLB), both Ports claim say they have no room for on-dock rail, but that’s a poor defense; the Ports created that situation by leasing out their available space and not seriously planning for on-dock rail. Our remedy now is admittedly more costly, but it is of their doing: it means creating new landfill for on-dock facilities, then so be it. Politicians who prioritized spending billions in public funds to accommodate cargo interests with a new bridge and a 14 lane freeway shouldn’t expect residents to accept shrubbery, RR money and asthma inhalers.
In May 2013, LBREPORT.com reported on sums BNSF gave to Council incumbents at that time (coverage here.) On Jan. 31, 2014, the next round of campaign finance reports are due…and LBREPORT.com will continue to follow the money